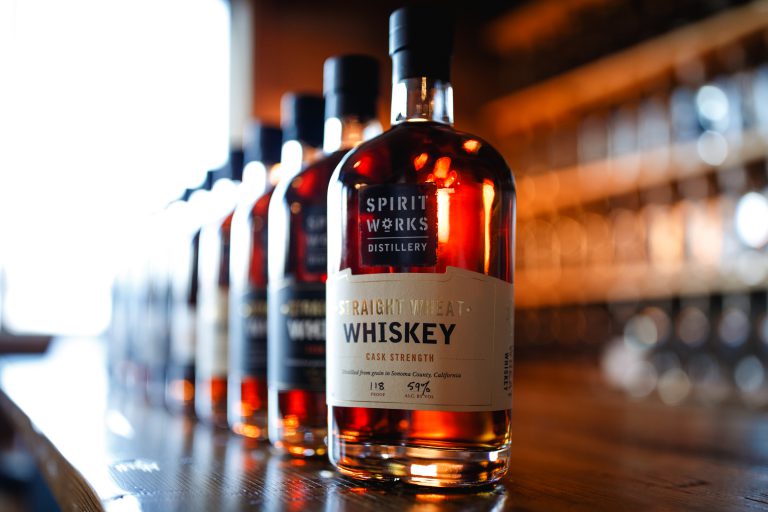 The proposition of the tasting room is simple: It’s half bar and half liquor store, a place where people can buy a flight of booze to enjoy right away and leave with a few bottles for later. That one-two punch at the cash register has made tasting rooms a lucrative venture for vintners, so it’s no surprise that the concept is spreading — first to breweries, and now to distilleries.

There are 89 licensed craft distillers in California, and business is booming. Nationwide, craft distillers saw sales rise 23.7 percent by volume in 2017. Last year was a tipping point for the industry, in that overall sales of craft liquor grew at a higher rate than the increase in craft distilleries themselves, according to the market analyst International Wine and Spirits Research. In other words, craft distilleries are gaining their footing in a competitive market historically dominated by beer, wine and imported spirits.

At the same time, California has passed two laws in three years that have loosened restrictions on how hard liquor can be sold. In 2016, distilleries were granted permission to sell bottles directly to consumers — provided they had participated in a proper tasting — which created an incentive to open tasting rooms and create a new revenue stream.

“Tasting rooms are vital to a distiller’s operation,” says Brandy Rand, U.S. president of International Wine and Spirit Research. “They offer potential customers the ability to try the product before purchasing it. This is especially important when considering the price points of craft spirits,” which tend to be higher than non-craft spirits and competing products such as craft beer.

Not coincidentally, hard-liquor tasting rooms are popping up in California, where wine tasting is already popular. Spirit Works, a craft whiskey and gin distillery in Sebastopol, just marked its fifth anniversary. That makes it a relative old-timer among North Bay distilleries, and more competition is on the way. Hanson of Sonoma Distillery, a family-run business that launched in 2014, opened a vodka tasting room this summer in what used to be the Carneros Brewing Co. taproom, adjacent to the distillery. Hanson’s specialty is a unique grape-based vodka, so its tasting room is especially useful for introducing potential customers to an unfamiliar product.

The new tasting room “has been great for us,” says distillery patriarch Scott Hanson, “because it allows us to communicate directly with our customers.” It’s been especially handy, he added, since the existence of grape-based vodka is a bit novel: “I don’t think people are confused, but they are curious about all the products besides wine that can be made from grapes.”

In Napa Valley, meanwhile, brown liquor is the order of the day. Loch & Union Distilling in American Canyon opened its doors this year, boasting whiskey aged in Napa wine barrels. It follows in the footsteps of Napa Valley Distillery, which has opened two tasting rooms in the city of Napa since 2014, when it reintroduced artisanal liquor to the region for the first time since Prohibition.

While Napa and Sonoma are indisputably Wine Country, the rise of craft liquor in these areas is less a threat than an opportunity. “This is just another reason for people to go there,” says Harry Kohlmann, CEO of market research firm Park Street. “Maybe the husband likes to drink whiskey, but the wife likes to drink wine. This way they both are happy.”

Down the road in Vallejo, a tasting room run by Savage & Cooke is a beachhead for the renaissance of Mare Island. Once a thriving naval base with more than 40,000 personnel, the island — actually a peninsula — has been mostly vacant since the demilitarization that followed the end of the Cold War. But wine entrepreneur Dave Phinney has leased and restored seven buildings on the base, for use by his new distillery venture and neighbors such as a coffee shop and an artisan co-op. Savage & Cooke’s tasting room features the distillery’s Tequila (aged in Chardonnay barrels) and whiskey (aged in Cabernet Sauvignon barrels), as well as bourbon and rye.

Tasting rooms may seem like a small addition to an existing business, but they are at the center of America’s long and complicated relationship with mood-altering substances. Modern alcohol regulation dates back to the end of Prohibition, when the 21st Amendment effectively delegated all regulatory decisions to the states. Laws then as now varied by state, but what collectively emerged was a three-tiered system of producers, distributors and retailers. By facilitating transactions directly between producers and their customers, tasting rooms gradually loosen the shackles that alcohol producers have worn since the 1930s.

While wineries and breweries have successfully lobbied for more tasting room permits and other freedoms over the past several decades, California distilleries have been slower to push for similar reforms. But that is changing: A 2016 law opened the door for direct sales, and this fall the industry gained even more freedom, so even more tasting rooms may be on the way.

Until 2016, tasting rooms were not merely an amenity for distilleries — they were a prerequisite for doing certain kinds of business. Unlike wineries and breweries, distilleries were legally prohibited from selling their products directly to consumers unless the business maintained a tasting room, and each customer participated in an official tasting. This unusual requirement meant that some distillers, like Falcon Spirits Distillery in Richmond, were unable to sell their wares in their own community.

Fortunately for distillers, the need to jump through this particular hoop was eliminated with the passage in August of SB1164, dubbed the Craft Distiller Op-pour-tunity Act. The bill empowers craft spirit producers to sell bottles at their distilleries, whether they have a tasting room or not. It also increases the total volume that craft distillers can produce in a year, from 100,000 gallons to 150,000 gallons.

SB1164 gives craft distillers more flexibility in how they use their space and other resources, but it’s unlikely to slow the propagation of hard-liquor tasting rooms throughout the state. For any business that has the space, the advantages are numerous.

“It’s not just the sales,” Falcon Spirits owner Farid Dormishian says. “It’s the fact that people can come and see the process firsthand. If we put a face behind the product, then they will understand the spirits a lot better. The more consumers find out, the better.”

Ted Trautman is a writer in Oakland. Email: travel@sfchronicle.com