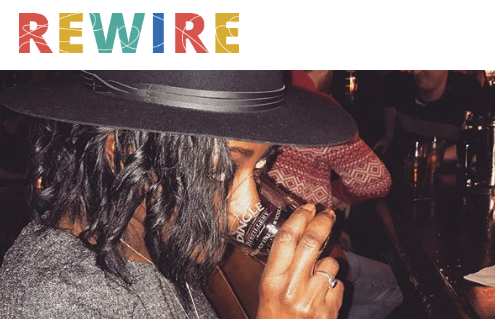 The first woman I met who really liked alcohol, the way foodies appreciate haute cuisine, loved a good Old Fashioned.I remember my female friend group sipping on elaborate berry concoctions and slushy frozen daiquiris in bars around Beijing while she raised a glass tumbler with a serious golden glint. Not a girly drink, I thought.There it was, rearing its head: the gendered labeling of alcohol. You, too, have probably seen that division up close and personal. If you’ve read a gift guide for men, you’ve read about whiskey stones, decanters, and an in-flight cocktail kit.Or you’ve seen the hot pink coasters with line art of wine glasses and “Mommy Juice” in a curly script.How did drinking spirits straight become some kind of proving ground for manliness, while we associate mixed drinks heavy on the fruit juice or bubbly wines with girls’ nights and brunch?And how are women in the alcohol industry starting to turn the story around?History shaken (and stirred)The relationship between American women and alcohol hasn’t always been a friendly one. In the 19th century, women were expected to stick to private life, upholding moral and religious values for their families and exercising little influence outside of the home.

Women got their chance to make those private values the basis of game-changing activism in the early 1800s, when numerous social and religious campaigns cropped up, including the movement for temperance, or abstinence from alcohol.Temperance proponents argued that alcohol had deleterious effects on society. As the United States moved into the industrial age, good citizenship was increasingly defined by a person’s ability to work, and work hard. It’s difficult to operate machinery or plow the fields if you’re stumbling drunk.Plus, if men were supposed to provide for their families, every penny spent on spirits was a penny stolen from wives and children starving at home. One of the most high-spirited temperance activists, Carrie Nation, made a name for herself by attacking saloons with a hatchet.The tides began to turn in the 1920s — ironically, during Prohibition. Women drank in speakeasies, manufactured moonshine and ran illicit bars in their homes, Erin Blakemore wrote in “How Prohibition Encouraged Women to Drink.”

Gender roles on the rocks

The old social order of male-dominated saloons and strong stigmas about the kind of women who drank in public imploded. Over the following decades, social and economic restrictions keeping women from drinking fell away.Advertisers and the alcohol industry, notorious for campaigns aimed straight at the male gaze, took note. But they chose to appeal to women by producing sweeter flavors, calorie-conscious lines like Skinnygirl, or even the ridiculous Beer for Her.It’s 2019 and we’re still making snarky comments about “girly drinks” at the bar. Irrationally assigning gender roles to drinks reflects that our society still clings to outdated ideas about “holding your liquor” being a testament to manhood (read: strength) and women as fragile creatures who need a spoonful of sugar to wash the alcohol down.These stereotypes don’t help anyone. Maybe the fraternity pledge or the girl pounding tequila shots at the party to “keep up with the boys” both wish they didn’t need to imbibe hard alcohol to prove they belong. Maybe that bearded, flannel-wearing dude at the bar would really rather drink a Mai Tai than an IPA. And maybe that petite woman out on the town with her girlfriends is craving a glass of scotch, neat.

Doing it for themselves

Women are leading the charge to reject the assumptions that divide drinks by gender.Julia Ritz Toffoli founded Women Who Whiskey, a whiskey club for women to taste spirits and meet like-minded people. The group now has more than 20 chapters in cities across the United States. Sexism around alcohol is one reason Women Who Whiskey got off the ground. Toffoli wrote on her website that she had met women who “shared all the times that our ordering whiskey had raised eyebrows.”“Eventually I reached a critical mass of conversations about how ridiculous it was that whiskey was still ‘a man’s drink,’ and that we deserved ownership too,” she wrote. “We were tired of hearing, ‘Whoa, that’s a strong drink for a little lady! Sure you can handle it?’”Women are doing more than “handling it.” Like the female entrepreneurs of the Prohibition era, they’re entering the business of distilling.One of these entrepreneurs is Ashby Marshall, the co-founder (with her husband Timo) of Spirit Works Distillery in Sebastopol, California. She’s the first distiller in her family.“I was drawn to distillation because it is this amazing balance between science, art, and manual labor, depending on what you’re doing each day,” Marshall said. “After I had solidified the science side of distillation, it took a long time for me to develop the ‘art’ which I often equate to cooking and being able to adjust and be flexible based on your senses. I thank my mom for those great cooking skills I have translated in an entirely different way.”Spirit Works Distillery makes both whiskey and sloe gin (a traditionally sweet liquor). But instead of taking the easy route and doing “the obvious mother’s/father’s day pitches,” Marshall said they “try to be inclusive and simply invite whiskey and sloe gin lovers alike.”She said she’s optimistic about gender representation in the distillation community. She encourages women who want to get into the game to stand their ground.“Knowledge is power,” Marshall said. “In a know-it-all world, the best way to keep up is to keep learning and challenging yourself.“Distillation is an ancient science for sure, but that doesn’t mean that your next moment as Marie Curie isn’t around the corner.”The next time you hear someone disparaging a “girly” drink or asking a woman if she’s sure she can handle that whiskey, tell them about women out there challenging tired old gender roles from stills and barstools. Then raise a glass of your preferred beverage and drink for yourself, not for anybody else’s expectations.

Adora Svitak is a Bay Area-based writer with a long-standing passion for education, feminism and youth empowerment. She has presented to audiences at the United Nations Economic and Social Council’s Youth Forum, TED and numerous education conferences around the world. Adora studied international development, South Asia and creative writing at the University of California, Berkeley. She blogs at adorasv.blogspot.com and tweets @adorasv.