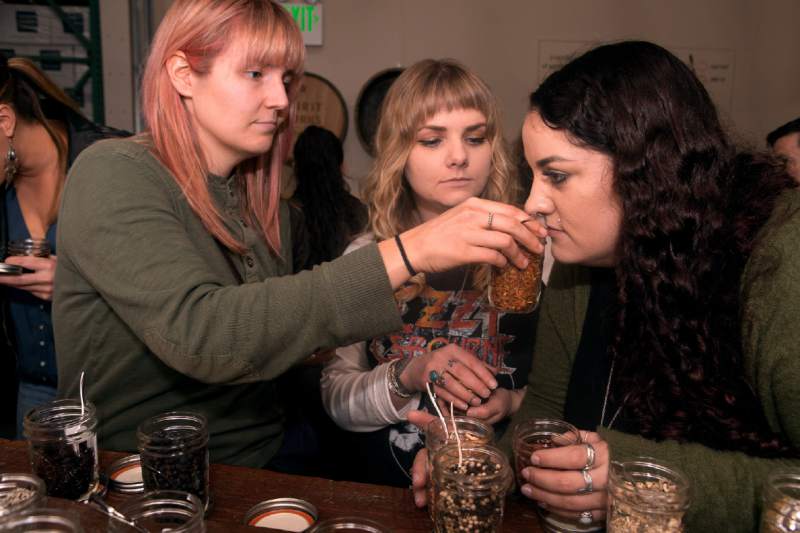 When liquor lovers gather at Sally Tomatoes in Rohnert Park on Saturday for the first Wine Country Distillery Festival, they will be tasting craft gins, whiskeys, vodkas and more, including the first locally made commercial absinthe, from artisan producers throughout Northern California.

They will also be savoring craft concoctions — shrubs, tonics, flavored syrups, boldly seasoned nuts and a kaleidoscope of bitters from North Bay producers — that have followed in the wake of the spirits revival.

Bitters are of particular interest, in part because there are endless variations, more than enough to hold the interest of foodies obsessed with the next exotic taste; and in part because its history reaches back hundreds, even thousands, of years.

There were once dozens of domestic bitters producers, but as Prohibition was enacted a century ago and picked up steam during the last half of 1919, demand declined. Only three brands — Angostura, Peychaud and Fee Brothers — survived.

For the next several decades, one or more of these bitters could be found in nearly every bar around the world. The Manhattan, Sazerac, Old Fashioned, Champagne cocktail and many other classic drinks all rely on bitters for their signature taste.

Bitters, sometimes called digestive bitters, are also used medicinally but more so in the past, it seems, than currently. There was a time when someone suffering an upset tummy would be treated with a glass of sparkling water or ginger ale spiked with a dropper full of orange bitters to ease symptoms. These digestive bitters work surprisingly well and are especially helpful when you are recovering from an intestinal virus.

But what are bitters, exactly? The answer is simple: Bitters are alcohol that is flavored by macerating herbs, spices, roots, bark, flowers, berries, fruit and vegetables for weeks, months or years. The concoction is then decanted and sold in small bottles typically fitted with an eyedropper.

Flavors are so intense that two or three drops can be enough to transform a beverage. Orange is probably the most common flavoring agent but ginger, grapefruit and cardamom are extremely popular as well.

Today, interest focuses primarily on culinary bitters, with flavors that reflect their makers’ passions. These new craft bitters have captured the attention of restaurant chefs, too, and it is increasingly common to find dishes flavored with a dash of bitters.

Napa Valley Distillery, which makes several of its own bitters, sells bitters from dozens of producers, including those from the other three North Bay makers: Bitter Girl and Monarch Bitters of Petaluma and King Floyd of Novato.

Among the Napa Valley Distillery’s most unusual flavors are Spruce Shoots, featuring citrus and pine; Dandelion and Burdock; and Wild Sage and Spiced Cranberry. (napadistillery.com)

Erin Hines, who founded Bitter Girl Bitters in 2013, makes her bitters using mostly ingredients she grows herself. After taking some time off last fall as she welcomed her firstborn in September, she released a new flavor, Go Walnut, using nuts from her two trees.

“Most producers go in the direction of nocino,” she explained, referring to Italy’s sweet walnut liqueur. “I wanted the walnuts to be the focus so I didn’t add other ingredients.” The Go Walnut is really bitter, she added.

Bitter Girl Bitters are sold throughout the United States and in Australia. (bittergirlbitters.com)Monarch BittersMonarch Bitters was founded by Phaedra Achor in 2015. Her newest flavors include Smoked Salt & Pepper Bitters; Honey Aromatic Bitters; and Honey Lavender Bitters, which join such flavors as wormwood, cherry vanilla, citrus basil, bacon tobacco, cayenne ginger and lavender.Achor teaches classes, too, that she refers to as “Mixology 101.” At a class at Spirit Works Distillery in Sebastopol in late January, 20 students were tutored in the history of bitters in cocktails and were given a formula for crafting balanced drinks, which they used to make their own, on the spot.

They also made their own bitters, using a Spirit Works spirit, Monarch syrups and botanicals from among those Achor brought to class. She sent them on their way with instructions to store their bitters in a cool dark place and to shake them vigorously once or twice a day for at least two weeks and longer for more intense flavors before decanting it.A decanted bitter will keep for months and, honestly, years without being refrigerated.Monarch Bitters are sold in specialty retail shops and tasting rooms throughout the North Bay and beyond. (monarchbitters.com)

When Lawrence Floyd Batterton launched King Floyd brand bar provisions in Novato in the summer of 2017, he brought nearly three decades of experience in the herbal and medicinal extract business to his new endeavor.Bitters, he explained, are made similarly; the only difference is the ingredients.Batterton worked on his first flavor, Aromatic, for three years, going through about 15 batches before he was satisfied.This bitters includes classic ingredients such as gentian root, perhaps the most popular bittering agent; ginger and cacao; along with a touch of maple syrup and molasses, black walnut and elderberry syrup, all of which contribute to the bitters’ deep color.He makes an Orange Digestive Bitters with bitter orange peel, ginger, gentian root and maple syrup. King Floyd’s Cardamom Bitters includes gentian root and Montmorency tart cherries in addition to cardamom.King Floyd also makes cocktail syrups, bar snacks such as Dill Pickle Virginia Peanuts and flavored rim salts and rim sugars.You’ll find King Floyd products at specialty retail stores and tasting rooms throughout the North Bay and beyond. (kingfloyds.com).

A highlight of the upcoming distillery festival will be a cocktail competition featuring Napa County’s Charbay Distillery Meyer Lemon Vodka and King Floyd bitters.And there’s more fun to come. On March 31, Young & Yonder Spirits of Healdsburg will host a Bitters Battle, a bartenders competition.It is spearheaded by Danny Ojinaga, beverage director at Mario & John’s bar in Petaluma, and co-founder, along with Michael Franco, of Good Time Bros, a podcast about bars. Franco also works at Mario & John’s.

The Bitters Battle will be their second event.

Details — time, admission fee, the non-profit the event will benefit — are still being worked out.For updates, check goodtimebros.com or youngandyonder.com in a few weeks.

Jackson’s Bar and Oven, located in Railroad Square at the corner of Fourth and Davis streets, features this cocktail highlighting three of King Floyd’s bar provisions.

Put the salt and sugar on a small flat plate and mix well.Rub the rim of a glass — a Margarita or Martini glass works well — with the lemon wedge and then dip the edge into the salt and sugar mixture. Set the glass upright.Fill a cocktail shaker with ice. Add the mezcal, amaro, grenadine, egg white and bitters and lock the lid in place. Shake vigorously for at least 30 seconds. Strain into the glass and enjoy right away.Note: Jackson’s Bar & Oven makes its own grenadine. To make it at home, macerate raspberries and strawberries in sugar for about an hour in a non-reactive saucepan. When the fruit has released its juices, add pomegranate juice, several strips of orange peel and a generous splash of pomegranate molasses. Simmer gently for several minutes, remove from the heat, let cool and strain into a clean jar.

This cocktail comes from Mario & John’s in Petaluma. Cynar is made with artichokes and so it is, of course, bitter. The cardamom bitters cozies up to it beautifully and adds a delicious floral quality.

Fill an Old Fashioned glass about half full with small ice cubes. Add the mezcal, Cynar and bitters and stir gently.Hold the grapefruit peel close to the top of the glass, give it a firm twist to expel some of its volatile oils and drop it into the glass.Enjoy right away.

If you want to know why Danny Ojinaga named this cocktail after a main thoroughfare in Santa Rosa, you’ll have to stop by Mario & John’s in Petaluma and ask him.And in the likely event that you have no dried blood orange slices in your pantry, feel free to use a fresh slice; just cut it quite thinly.

Fill a cocktail shaker with ice. Add the rye, applejack, lemon juice, honey, aquavit and bitters, lock the lid in place and shake vigorously for about 30 seconds.

If using the slice of blood orange, press the two cloves into it. Strain the cocktail into an Old Fashioned glass, add the slice of orange, if using, and enjoy right away.

If you are over a certain age, you might not understand the name of this feisty cocktail from Mario & John’s: New Kids On the Block.

Fill a cocktail shake with ice. Add the bourbon, sherry, lemon juice, honey syrup and bitters. Lock the lid in place and shake vigorously for about 30 seconds. Strain into an Old Fashioned glass, garnish with dill and enjoy right away.

If you are new to bitters and unsure about how to use them, this is an easy place to start.

Because grapefruit juice is itself a bit bitter, the flavor won’t come as a shock; instead, the bitters merges beautifully with the juice to make a compelling vinaigrette, delicious on simple green salads but also great on sautéed fish and gently poached chicken breasts.

Put the minced shallot into a pint glass jar, add 2 or 3 generous pinches of salt, the cardamom and the vinegar. Set aside for 20 minutes.

Add the grapefruit juice, several turns of black pepper, 4 or 5 shakes of bitters and the creme fraiche. Seal the jar and shake vigorously. Add the olive oil and shake again.

Taste and correct for salt and pepper. Use right away or seal the jar and store in the refrigerator for no more than a day. Shake before using.

Enjoy this simple dressing from Erin Hines with steamed broccoli, Brussels sprouts, cauliflower or a simple green salad or use it as a dip with sliced radishes and celery.

Put the mustard, lemon juice, vinegar and bitters into a small glass jar and add several turns of black pepper.

Add the olive oil, seal the jar and shake well.Use right away or store in the refrigerator for up to 3 days.

Last fall, Lawrence Batterton of King Floyd told me, whipped cream with cardamom bitters was a popular topping for pumpkin pies. It is easy to expand on his delicious concept, using your favorite bitters.

Put the cream into a deep mixing bowl and add two droppers full or several shakes of bitters. Using a balloon whisk, whip the cream until it reaches the consistency you prefer but before it separates into butter and buttermilk.Taste and mix in a bit more bitters if you prefer a stronger flavor. Use right away or cover and refrigerate for a day or two.Suggested uses:

Michele Anna Jordan is the author of 24 books to date. Email her at michele@micheleannajordan.com.