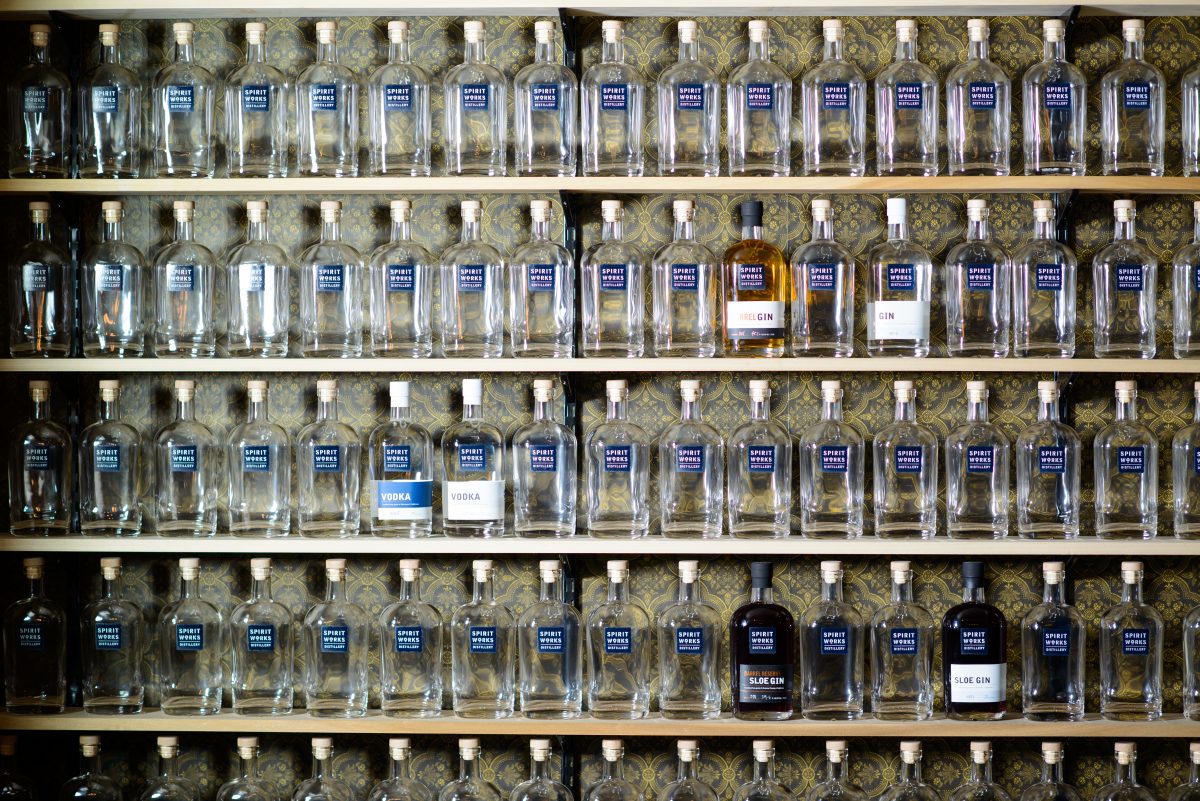 Napa Sonoma Magazine: Get Into The Spirits

Sebastopol’s Spirit Works Distillery was founded by Ashby and Timo Marshall, who moved to Sonoma County when they felt the pull of Timo’s family history in gin production.Spirit Works distills seven different spirits in-house, including gins, vodka, and whiskey, using wheat milled at its facility.Tasting flights, bottles of spirits, bar tools, and spirit education are offered in the tasting room, which also features a view into the distilling plant. The majority-female distilling team is rare in the male-dominated liquor business, providing a fresh perspective on classic drinks and experimental new features, including headphones for spirits aging in barrels. The theory is that varying music vibrations will produce drinks that taste different. So, the question is, does bourbon age better with Led Zeppelin or Tchaikovsky?6790 McKinley St., Ste. 100, Sebastopol, (707) 634-4793. spiritworksdistillery.com.Read the whole article here.

Get Into the Spirits

Napa and Sonoma offer a tasty mix of options when it comes to the craft-distilling trend.

There’s a new spirit in Napa and Sonoma, and it’s strong—80 proof, mostly—with the scent of local flowers, fruits, or charred oak barrels, and a taste ready to challenge rivals in Kentucky, London, and Moscow.The craft-distilling movement has taken Wine Country by storm, transforming what was a nearly nonexistent business a decade ago into a thriving industry, featuring at least 15 distilleries and spirit-makers that produce dozens of gins, vodkas, bourbons, brandies, and more each year. These local producers range from a couple in a converted garage to a multinational corporation, in locales as diverse as industrial parks and quaint in-town tasting rooms.While the people, ingredients, and processes may be different, these spirits share the passion and creativity required to create such new tastes. Get the flavor of this expanding scene in Napa and Sonoma, by visiting a few of these distilleries for a sip or two.

Napa Valley Distillery offers spirit tastings, bottle purchases, and bar ingredients at two locations—its distillery (complete with a Grand Tasting Salon) and its old-timey shop inside the Oxbow Public Market, where colorful bartenders serve up seasonal tasting flights and samples of an extensive collection of cocktail-making bitters, herbs, and syrups.Its flagship product is the Napa Reserve Neutral Brandy distilled from Napa Valley sauvignon blanc into a drink that proprietor Arthur Hartunian refers to as the “UnVodka,” with a supersmooth, slightly fruity taste that blends well in a cocktail. Its popular Old Hollywood Ginn is a great base for classic cocktails but can also stand alone with a dash of tonic.Upcoming seasonal releases include Tom Collins Cocktail in a Bottle, which incorporates the distillery’s spirits and bitters in a premade drink, as well as Old Hollywood Gin Summer Sequel, a more floral and citrusy version of the original.Distillery and Tasting Salon: 2485 Stockton St., Napa, (707) 265-6272. Oxbow Tasting Room and Bar Shop: 610 First St., Ste. 8, Napa, ( 707) 226-9269. napadistillery.com.

Well-established in the world of wines, the Coppola Family was recently inspired to move into spirits by their family tradition of having a cocktail before dinner. Made with waters filtered naturally at the estate, the new brandy, vodka, and gins are part of the Great Women Spirits line—named by Francis’ wife, Eleanor—which honors overlooked women from history.The Ada Lovelace gin, whose namesake was a 19th century British mathematician and a little wild for a woman of her time, has a classic British taste, with clean juniper flavor accented by 10 botanicals, some sourced on the Coppola estate. The Countess Walewska vodka—honoring a Polish patriot known for her purity (and a relationship with Napoleon)—is a potato-based spirit with a hint of mineral flavor from the local waters, and makes for a great base for cocktails. The Maria Gaetana Agnesi brandy highlights a famed 18th century Italian calculus scholar. The brandy is made from blended grapes, providing a smooth, sweet taste with a little spice—good on its own or in cocktails.300 Via Archimedes, Geyserville, (707) 857-1400. greatwomenspirits.com.

Spirit Works Distillery: bottles of the spirit-makers' gins, vodkas, and whiskeys line the wall in the tasting room.

Sebastopol’s Spirit Works Distillery was founded by Ashby and Timo Marshall, who moved to Sonoma County when they felt the pull of Timo’s family history in gin production.Spirit Works distills seven different spirits in-house, including gins, vodka, and whiskey, using wheat milled at its facility. Spirit Works’ signature sloe gin is a British aperitif using Bulgarian sloe berries. It tastes similar to port wine and can be used as a cocktail ingredient, replacing sweet vermouth. Spirit Works’ Bottled in Bond—certified, 100-proof, four-year aged rye is a strong new release.Tasting flights, bottles of spirits, bar tools, and spirit education are offered in the tasting room, which also features a view into the distilling plant. The majority-female distilling team is rare in the male-dominated liquor business, providing a fresh perspective on classic drinks and experimental new features, including headphones for spirits aging in barrels. The theory is that varying music vibrations will produce drinks that taste different. So, the question is, does bourbon age better with Led Zeppelin or Tchaikovsky?6790 McKinley St., Ste. 100, Sebastopol, (707) 634-4793. spiritworksdistillery.com.

Young and Yonder Spirits: Co-owners and distillers Sarah and Josh Opatz have relocated their production and tasting room to Healdsburg.

Josh, the son of a Sonoma winemaker, and Sarah Opatz, a graphic designer, combined their creative talents in 2013 to distill a top-shelf collection of vodkas, gins, and absinthe. Their Lime vodka has the equivalent of five Sonoma limes squeezed into every bottle, while their Harbor of Broken Souls gin mixes eight local botanicals to provide a complex but highly drinkable blend. For purists looking for a good neutral spirit for cocktails, their Armont vodka has a clean taste.Young and Yonder opened a new production facility and tasting room in downtown Healdsburg this May. The owners hope to attract aficionados with the taste ofabsinthe and to introduce a freshly aged bourbon. The homey facility is a cocktail of two-parts tasting and one-part education, with an open laboratory; an extensive library of local botanicals, herbs, and mixers; and enough test tubes to excite a science teacher.449 Allan Ct., Healdsburg, (707) 473-8077. youngandyonder.com.

Griffo Distillery: Taste a flight at the Petaluma distillery and then tour the production facility.

In a Petaluma warehouse, husband and wife Michael and Jenny Griffo manage an end-to-end process of gin and whiskey production, using Russian River water and home-milled corn and wheat. Their whiskeys are aged in a variety of barrels, including some used for stout beer (from local Lagunitas Brewery), as well as American oaks.The small-but-welcoming Griffo tasting room offers seats at a bar with a view of the production floor through large glass windows. Become a member of the team by joining in periodic volunteer bottling workshops, which sell out quickly and provide tasty liquid rewards.Griffo’s Scott Street Gin won gold at the S.F. World Spirits Competition. It has a classic gin taste with lemon and floral notes, and mixes perfectly in cocktails. The latest Griffo limited-production releases include an interesting Acre Cold Brew Coffee Liqueur created in partnership with local favorite Acre Coffee.1320 Scott St., Ste. A, Petaluma, (707) 879-8755. griffodistillery.com.

Since 2014, identical twins Chris and Brandon Matthies have pulled double duty as distillers, and as a firefighter paramedic and police officer. Their Windsor distillery originally sold vodka; they’ve since added gin, whiskeys, and a series of fruit-based brandies. The tasting room has the look and feel of a Kentucky moonshiner’s shack. And its location in Windsor’s Artisan Alley is near two wine-tasting rooms, a Ciderworks, and a brewpub, making it a destination for all adult-beverage fans.Sonoma Brothers’ rye whiskey distillation includes rye, wheat, and malted barley aged in charred oak barrels. The taste is a mellow, accessible mix of caramel and citrus that sips well neat or in cocktails. For a change of pace, the seasonal apple brandy distills Sonoma County organic apples and ages them in Russian River Valley Pinot barrels to provide a sweet and savory blend.7759 Bell Rd., Windsor, (707) 888-2120. sonomabrothersdistilling.com.

The town of St. Helena is the original home of one of the area’s first pot still distillers, and also hosts the newest craft spirits brand. Both have ties to wineries, so it’s no surprise that they take spirit cues from the Old World.The Karakasevic family’s Charbay Distillery originally was part of their Spring Mountain Road winery. Now located in Ukiah, it uses a classic alambic charentais pot still distiller. The East European family developed their double hand-distillation technique through 13 generations, launching here in the 1980s. They distill a full line of spirits, from whiskeys toinfused vodkas.JCB Spirits, an offshoot of Jean-Charles Boisset’s wine empire, is also based in St. Helena and debuted a line of spirits this spring. There’s gin made with a wine base from Boisset’s native Burgundy, France, including Pinot Noir and Chardonnay. The distillery also creates fancy infused vodkas with flavors such as caviar and truffles, which can make for a surprising cocktail. So, if you need a break from wine, JCB Spirits has you covered.

Have some fun with the local spirits, by trying them in some cocktails. Below are a few bars and restaurants doing creative things with the spirits of Napa and Sonoma.THE COPPOLA WINERYThe Coppola Winery bar and Rustic restaurant feature over a dozen classic and creative cocktails made with the new Great Women Spirits releases. Ada’s Cucumber Collins is a cool, refreshing gin-based drink to sip on a hot summer night in Geyserville, while the Agnesi brandy-infused Café Cinecitta is a good after-dinner option. francisfordcoppolawinery.com.GOOSE AND GANDERThis St. Helena bar and restaurant serves classic “retro-fresh” cocktails in an old-school setting. Gin from San Francisco–based Distillery No. 209 is used in its Rosemary-Pear Shrub, and the spot stocks a variety of local spirits for mixing up your favorite libations. goosegander.com.HEALDSBURG BAR AND GRILLRanked as having one of the top burgers in the country, the Healdsburg Bar and Grill is a great place to sample local spirits and beers. It uses Sonoma County’s Alley 6 rye whiskey in its house Manhattan cocktail. healdsburgbarandgrill.com.JACKSON’S BAR AND OVENThis Santa Rosa eatery serves high-quality comfort food made in a wood-fired pizza oven—and more importantly, a great selection of artisanal cocktails using local ingredients. It features Sonoma Brothers gin in the Blood In Blood Out orange-flavored cocktail, and stocks many other local spirits. jacksonsbarandoven.com.KINFamily-friendly dining and a locally based cocktail menu coexist at this restaurant in Windsor. The latter includes Alley 6 rye in its Back Alley Manhattan and Sonoma Brothers’ gin in its Cuke and Kuip. kinwindsor.com.