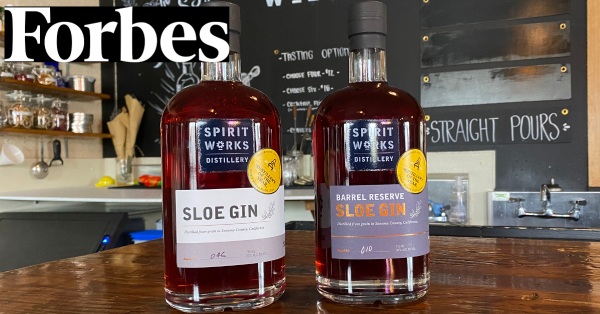 Forbes: Sloe Gin Deserves To Be Considered a Bar Essential

“Sloe is to England what limoncello is to Italy,” remarks Jared Brown, drinks historian and Master Distiller of Sipsmith Gin. “But then it hit me: limoncello is palatable.”

While arriving at the final recipe for Sipsmith’s Sloe Gin, he says he sampled many homemade English variations—all of which tasted remarkably similar in that they were cloyingly sweet and flabby, with a harsh finish. After a bit of research, he learned that most of the sloe gins in England were based on an 1881 recipe from a west country farmer, which had the sloes—which are like tiny plums the size of berries—harvested after the first frost instead of when ripe, macerating with heaps of sugar for months in very cheaply made gin. “Adding sugar at the start saturated the spirit, creating an osmotic pressure barrier that prevents it from extracting the natural fruit sugars. If there’s no added sugar, the spirit [has a chance to] pull the sugars from the fruit.”

Up until about a decade ago, any sloe gin that was commercially available in the states was exactly that kind of tacky mess, or it had synthetic color and flavorings, instead of the elegant, slightly perfumed, sweet-tart elixir that’s closer to a spirit (though below 30% ABV) than a sweet fruit liqueur. Few liquor stores carried them, and the few bars that had them kept them stashed away with the dusties on the off chance that one special customer comes in asking for it, perhaps for cocktails like (and this is real) a Sloe Comfortable Screw Against the Wall.

So why bother bringing sloe gin back? Because when it’s made well—with a quality gin as the base spirit, good fruit picked at the height of ripeness in late summer or early autumn, and the sugars added as a sort of dosage well after the fruit and gin has become well acquainted—it’s a beautiful, nuanced sipper with tons of versatility as a spritz, brightening cocktails like Negronis, simply enjoyed as an aperitif on the rocks (and pairs beautifully with strong cheeses like a port) or even as a toddy.

In 2008, Plymouth Gin released a sloe gin with hopes it would find its place in the craft cocktail renaissance. Soon after, as the craft distillery movement took shape, sloe gins, both stateside and abroad, began adding little magenta accents to the gin landscape.

Sipsmith distinguishes itself not only for its recipe, but for releasing its sloe gins as harvest vintages. Having sipped a 2014 vintage alongside the 2018, there was a noticeable difference: the 2014 is more fragrant, with tart flavors of blood orange and marzipan. The 2018 shares similar traits, but with deeper cassis-like flavors, more vanilla than marzipan and hints of baking spices.

Sloe gin is never one of those bottles that’s recommended as a bar essential, but it should be. A really good one is appreciated like an old friend one has lost touch with, and sorely missed when it’s gone.

Sipsmith: it’s worth it to go hunting for different vintages to taste subtle nuances in flavors and aromatics, not to mention having backup so as not to run out. (ABV 29%, $45)

6 O’Clock gin: This brand started in Bristol, England specifically as a sloe gin producer, available at independent shops and even garden stores. The London Dry base spirit came later on its own. The gins are just landing stateside, and will soon be available—including a Damson (another late summer plummy fruit) gin—nationally through mail order. Their Sloe is quite dry and fragrant, almost like a sweeter amaro. I like to make a spritz of it with the overproof 6 O’Clock Brunel. Sloe: 26% ABV, $40.

Plymouth Sloe Gin: the one that sailed in to sloe-ly awaken the category. 26% ABV, $35