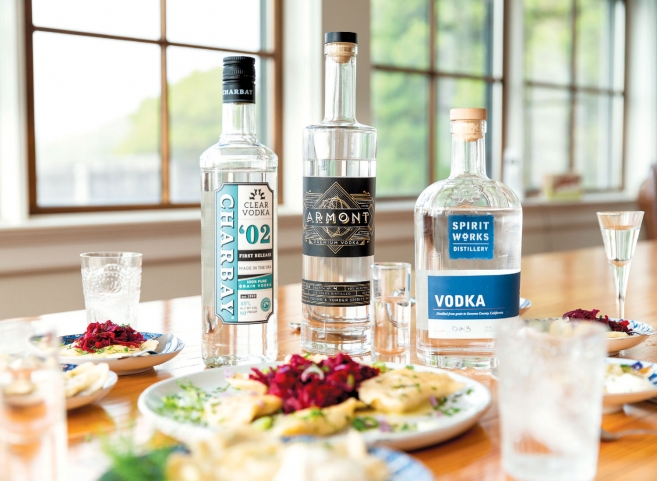 A freezer full of homemade Russian-style dumplings is my favorite way to stock up for the winter. Many cold, rainy days find me feeling too lazy for cooking projects that take hours of prep time, yet those are the days when sitting down to a meal of homemade comfort foods like dumplings feels like wrapping up in a warm blanket.I like to have two types of dumplings on hand, and oft en serve both at the same meal. Pelmeni are small ear-shaped, meat-filled dumplings. Vareniki are larger, crescent-shaped dumplings, usually filled with cheese, but sometimes they, too, can be filled with meat, or even fruit jam.Both styles of dumplings pair well with vodka, naturally.Here in the middle of grape, aka wine, country, many local vodka distillers have chosen to use grapes as the base for their spirit, and the results are delicious, but for the sake of authenticity here I sought out three locally-distilled yet traditional Russian-style vodkas—made with grain.Gone are the days when vodka was praised solely for its neutrality of flavor, exemplified by the extensive variety of flavored vodkas on today’s retail and bar shelves. Distillation methods also vary widely, and there are countless points of view on whether or not to filter and, if one does, how many times it should be done. Read on to hear what these local superstar distillers have to say about what makes their spirit unique.

The Karakasavic family has been crafting spirits since the late 18th century, first in Serbia, then on Napa’s Spring Mountain, and now in Ukiah. Miles Karakasavic, and his son, Marko, are 12th and 13th generation distillers, respectively, and the uber-talented duo behind Charbay’s diverse array of spirit offerings, including Charbay Clear Vodka. The quality and craft smanship of this spirit are exquisite. According to Marko, “The art of making vodka is preserving the mouthfeel of what’s being distilled.” He distills the spirit once, and doesn’t believe there is a need for charcoal filtration. Using fresh Northern California water, he says, completes the process of making a smooth, well-rounded vodka experience.Charbay Clear Vodka is made with American corn and rye. This grain-based vodka has a clarity of color that seems to shine from the bottle, a quality that I found to be unique. Its initial nose is clean, with alcohol and grain aromas. A silky-smooth texture ensues as it hits the tongue and slides around the mouth, noticeably thicker than other vodkas. Flavor-wise, it is bright with a tinge of grain flavor and has a citrus essence at the finish.I enjoyed this vodka best served chilled over ice, with a splash of sparkling water.

Spirit Works Vodka is an often-noted favorite among our area’stop mixologists and bartenders. The vodka is made from Sacramento-grown organic California Red Winter Wheat, which the Spirit Works team mills on-site and ferments using a specialized distiller’s yeast.This vodka is the perfect example of the importance of the “grain to glass” process that preserves the distinctive characteristics of the wheat, according to Ashby Marshall, Spirit Works’ distiller and cofounder with her husband, Timo.On first impression, this vodka delivers a strong yet delicate feel. The fruity and grassy notes in the nose do not carry over into the taste, which is creamy with rich vanilla and butterscotch undertones, with a pronounced cereal flavor coming from the wheat. It has exceptional texture balance, with a thicker than usual mouthfeel.I enjoyed the flavors and texture of this vodka while sipping it well chilled, which further enhances the creaminess.

A relative newcomer to the world of Wine Country spirit makers, Josh Opatz, influenced by his father, local viticulturist Pete Opatz (co-founder of Route 128 Winery and Vineyards), ventured out of the vineyards to pursue a dream of crafting high-quality spirits, together with his wife, Sarah. The motto for this distilling duo is “grain to shelf,” and, for me, this vodka really nails that sentiment.Josh and Sarah initially played with grapes, as most in the region do, but they say that in blind taste tests they determined that corn delivered the smoothest product, with a tinge of sweetness.Made from 100% non-GMO corn and distilled six times, Young and Yonder’s Armont Vodka is then purified a total of seven times, using multiple filtration techniques. The vodka has a corn-forward bouquet with subtle vanilla aspects and a pleasing peppery moonshine aroma. It tastes smooth and crisp, clean. It maneuvers around in the mouth quite easily and comfortably. There is a strong black pepper bite on the front with a sweet linger to the back. It’s sharp, potent and powerful, in a very feminine way. This vodka proves that there can be mastery in the novice.If you want an authentic Russian dumpling and vodka experience, this one was most fun to shoot ice cold, followed by a few warm and delicious dumplings.

To experience the full warming and filling effects of the ancient pairing of Russian dumplings and vodka, you first need to invite friends to enjoy them with you. Next, pour everyone a shot of icecold vodka. Instruct your guests to take a deep inhale, followed by a full exhale, shoot their vodka, revel in its taste and texture, noting the chewiness of the grain-based spirit on the tongue, and then enjoy a few dumplings. Repeat these steps until your hearts and bellies are warm and full.Of course, there is no need to shoot the vodka if that’s not your style, as all of these well-crafted vodkas may be enjoyed on the rocks or diluted with some sparkling water. Each of these also makes a very distinct and appealing martini.To read the entire article click here.