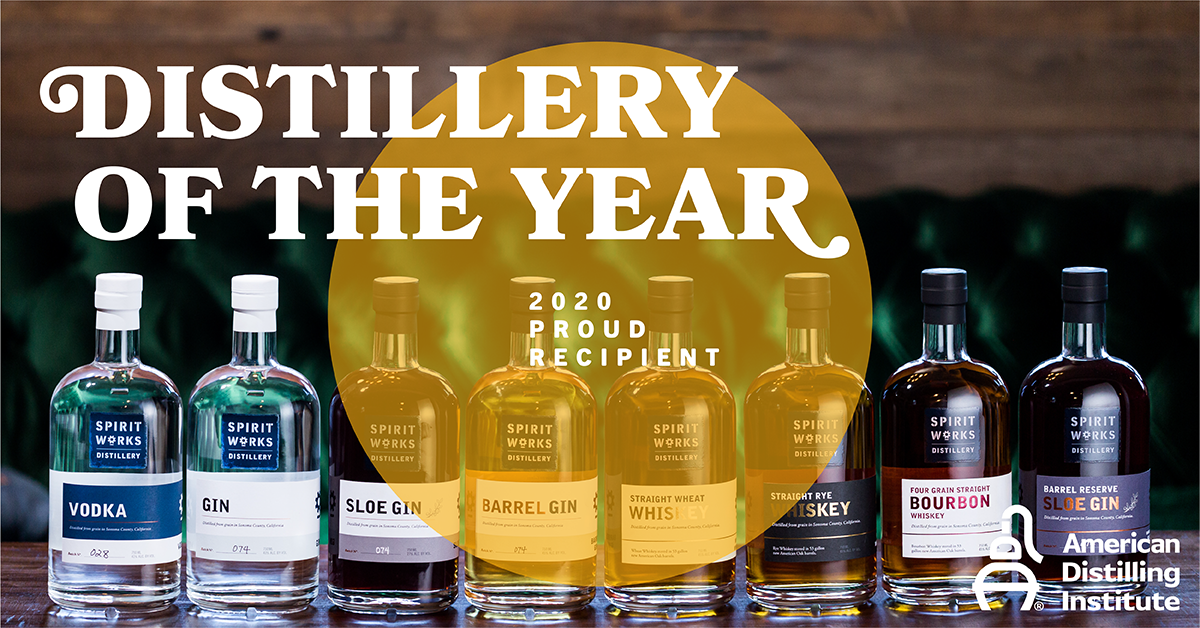 Distillery of the Year Announcement

The following is taken from the original release by Distiller Magazine, announcing the 2020 recipient of ADI's Distillery of the Year Award.

ADI began in 2003 with the vision of supporting the burgeoning distilling industry. In 2010 the industry grew to nearly 400 distilleries, and that year ADI started recognizing “Distillery of the Year” by giving the Bubble Cap award.

Over the last decade, many wonderful distilleries have won the Bubble Cap award. The first factor in choosing the awards is the spirits being made. We look for companies producing spirits that are artistic expressions of the people who make them — the same as paintings, music, movies or any other art form. Every Bubble Cap winner has one thing in common: these individuals, and the spirits they make, are leaders in the craft spirits industry, and more than the sum of their parts.

Spirit Works started by making a traditional English spirit that Timo’s family made as part of their tradition: Sloe Gin.

There was no Sloe Gin made in the US at that time, and very little even sold in the US. Ashby and Timo had vision and conviction that they could make a product that would turn consumers who had never even heard of sloe gin before into true devotees.

They have succeeded, and Spirit Works Sloe Gin rivals or surpasses European expressions. Like the distillery’s vodka and gin, it starts its life as organic wheat grown in California. This commitment to local and organic ingredients also sets Spirit Works apart as a leader in the industry. Spirit Works also makes fantastic whiskey, which is aged at least four years before release. That takes true commitment and patience, and Spirit Works keeps raising the bar.

But the Bubble Cap award isn’t just about great spirits: it’s about celebrating distilleries that contribute to the craft distilling community. In this area, Spirit Works is also a leader, woman owned, family owned, inclusive, diverse, accepting and supporting everyone in the community. Ashby and Timo’s previous lives were in environmental justice, and they brought that philosophy to their new endeavor. They not only wanted to make spirits but wanted to make sure everything they did was giving back in the process. They didn’t just buy grain; they only buy organic grain. Every decision was looked at from multiple angles, and the decisions they made had to allow them to sleep well at night knowing they were trying to make the world a better place through their participation in it.

Spirit Works has a fantastic partnership at the helm. Ashby focuses on the production, and Timo focuses on business, but both do all jobs as necessary. But they could not have made this dream a reality without a fantastic team that are all equally passionate about making and serving the best spirits in the world.

They’ve looked beyond themselves into the broader industry in California, where distilleries were previously not allowed to sell bottles, or even charge for a tasting. Timo volunteered as President of the California Artisanal Distillers Guild, led in efforts to pass the law creating the type 74 license which allows for spirits tastings, cocktail sales and bottle sales directly from the distillery. Today in CA, there are distilleries in operation that this model accounts for 70–80% of their revenue. That would not have been possible without Spirit Works stepping up to help make it happen.

When you add up all of this together they truly are leaders in the industry that deserve the highest level of recognition. Ashby and Timo, congratulations."