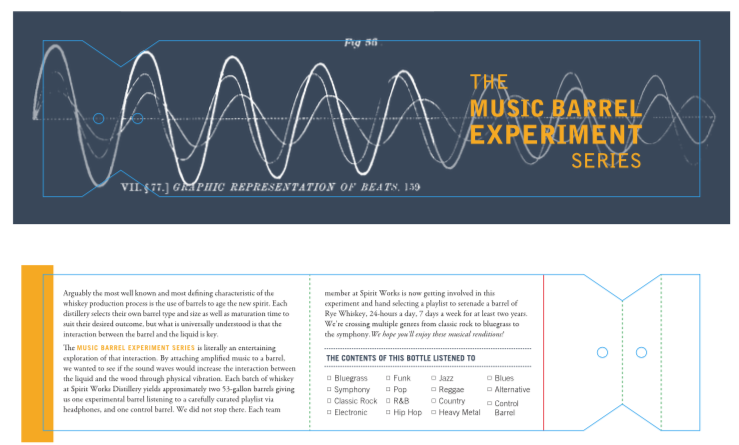 There is hope that 1-year-old whisky may soon rival 16-year bonded liquor in taste and smell and at a vastly lower cost. … Chemists are glad Prohibition is over so they no longer have to listen to bootleggers for synthetic liquor recipes.”
—San Antonio Express, March 29, 1934

When Mike Swanson answered his cell phone, the noise from his tractor made it difficult to hear. But when the co-owner of Far North Spirits turned off the engine, which was in the throes of laying down AC Hazlet winter rye for his Roknar whiskeys, he could be heard loud and clear.

“You’re talking to a guy who grows his own grain and turns it into whiskey by traditional methods. I’m not hard-core but I do appreciate the romance that is barrel-aging,” he said. “I also understand the science of it, but it seems [it’s] skipping vital steps, putting whiskey in barrel and letting it age and interact with its environment. I’m not convinced you can get the same result. But I could be proven wrong.”

Far North — the northernmost distillery in the contiguous 48 states — is located in Hallock, MN, just 25 miles south of the Winnipeg line. Far North began making spirits only five years ago, with what are considered conventional methods. Since then, American distilleries have proliferated, and some by using a myriad of accelerated-aging methods to bring products to market more rapidly. These distillers, using so-called technological maturation methods, have garnered mostly derision from traditionalists. Some cry foul at the unfairness of releasing a spirit in 2-to-3 years (or even in 6 days!) instead of the established decade or two, while others bemoan that imparting aromas and flavors from rapid-aging barrel methods, without imparting nuanced terroir and provenance aspects, misses the point.

But traditionalists, such as Swanson, and some others seem at least open to what the science being adopted by accelerated-aging proponents has achieved thus far.

There are at least a half-dozen distillers using rapid-maturation techniques, each with as varied methods as have thus far been conceived.

San Antonio’s Ranger Creek Brewing & Distilling ages its bourbon for 2½ to 3 years in 25-gallon casks and in smaller casks for 16–18 months, relying on the Texas heat to accelerate the process. Highspire in Paso Robles, CA, uses wood chips to accelerate the process. Louisville’s Jefferson’s Bourbon, with its Ocean label, puts its casks on ships, thinking the rocking and rolling will accelerate reactions. Spirit Works Distillery of Sebastopol, CA, and Copper & Kings American Brandy in Louisville, KY, love to blast their barrels with music in the hopes that the sounds somehow stimulate the process. The latter uses a quartet of subwoofers in its rickhouse for what it calls “sonic aging,” claiming that the pulsations cause “the alcohol molecules to start to move away from the pulse and collide with other molecules, which eventually collide with the barrel walls, which starts to create a ‘distillate wave’ resulting in increased frequency of contact … and enhances maturation.”

Lost Spirits Distillery seems to have attracted the most attention because of its peripatetic “mad scientist” co-founder, who has earned some fascinating reviews for his methods and the quality of his products. Bryan Davis, an American, began his spirit-making life in Spain, moved his operation to Northern California and now seems to have settled in Los Angeles, where he’s opened a Hollywood- and fantasy-inspired theme park of a distillery that includes a boat, a carousel, and an “enchanted gift shop.” [For more on the Lost Spirits Distillery tour, see the story on page 178 in the Distiller Winter 2018/19 issue.]

Davis may be some sort of marketing genius, but he’s also developed a reactor in which he has seemingly figured out a way to accelerate not only the barrel components of spirits, but also apparently the scientific nuances of oxidation and fermentation that create the precursors for flavor compounds.

“Some of the things I do to the fermentations to get flavor precursors out of them are unusual, but only in the sense that I do these things with purpose,” Davis says. ”They are all borrowed from traditional techniques but sometimes applied in new ways.”

Inside the Lost Spirits’ reactor — which he says increases the power of light to “three times the power of what you get at the equator at noon” — photons break apart the polymer structures of the wood. The results combine with short-chain fatty esters from fermentation to produce fruity esters, and with them desirable aromas and flavors beyond what rapid maturation in a small barrel can achieve.

Davis readily admits that his spirits are not of “advanced age,” but “in my case I am putting it in quotes because while our booze is chemically mature, it is not of advanced age.”

Canadian distillery consultant Ian Smiley counts Lost Spirits and Terressentia among those whose methods “have merit” and “are not bad.” Otherwise, Smiley says, “I think most of it is snake oil.”

Smiley thinks Lost Spirits and Terressentia are “getting traction with this technology. But, the ones that are just using small barrels or oak chips just add a lot of barrel constituents but there’s no esterification or maturity. It’s like just adding oak ingredients to white dog.”

So, is there a future for accelerated aging, no matter the method?

“Yes!” Ian Smiley answers succinctly and with an exclamation point. “Someone will finally break the code and figure out how to speed up the very slow and inefficient chemical reactions that take place in a barrel.”

Terressentia’s CEO Simon Burch says “after extensive research” the inventor of the company’s closely held technology “concluded that the barrel serves two purposes: most obviously the wood staves release flavor and color into the distilled spirit, and for this reason all whiskeys produced by Terressentia are still aged in the traditional way.” Terressentia completes its process in 6–12 months. Instead of mimicking chemical reactions that rely on time in barrel, the company’s technique relies on filtering out undesirable flavor congeners from young whiskeys.

Cleveland Whiskey in Ohio claims its products finish in 24 hours, after “white dog” whiskey is rested in stainless-steel with cut-up staves for a couple of weeks. But Cleveland’s CEO Tim Lix has difficulty with being characterized as an accelerated-maturation distiller.

“I don’t think of us as a speed-aging company, although we do have technology that helps with the maturation process,” he says. Cleveland’s methodology is essentially to place its spirits in a pressure-cooker atmosphere. But Lix adds, “Importantly, we can utilize woods for natural flavor that you could never build a barrel from. It would leak like a sieve.” Lix explains his bourbons are partially aged in oak barrels with woods such as black cherry, sugar maple, apple and hickory.

But he adds: “Age is irrelevant. It’s all about the taste, and if technology can help that, I’m all for it.

“If we’re being classified as simply an ‘accelerated-aging’ company, then that’s a problem. Yes, we use some technology; it’s proprietary and it does accelerate a process that traditionally takes years. But more importantly, we aren’t restricted to the use of oak barrels except where they are required by regulations.”

Among the most vocal critics of speed-aging is spirits blogger Chuck Cowdery, who had a short but pointed message and perhaps a new nickname for the technique:

“The main problem with so-called ‘accelerated aging’ is that of the three things that happen to whiskey in the barrel, accelerated aging schemes only address one of them, extraction,” he explained in an email. “You can accelerate extraction but oxidation and evaporation simply take time. A better term might be ‘engineered aging,’ because these schemes do change the character of the spirit. Whether those changes are for good or ill is up to the individual drinker to decide.”

Brian Ellison, president of Death’s Door Distillery in Middleton, WI, put it another way: “When I was a preteen, growing up on a farm in the Midwest, I was a member of the farm club 4-H. … One year, I took the course Microwave Cooking that taught all about the new technology of cooking with a microwave. I had to cook a whole meal with the microwave, so I chose a breakfast. I was able to make eggs okay, the bread was chewy and the bacon was disgusting. What I learned from it was that technology, while letting us achieve new methods to tackle old ones, doesn’t always give us what we really wanted.”

Allen Katz of Brooklyn’s New York Distillery took a pragmatic approach. “Patience is the best aging for me. From what I’ve experienced to date, if someone comes up with something, I have an open mind. But I haven’t seen anything magically or majestically that says, ‘Boy, I’ve got to drink that.’”

Far North’s Mike Swanson, who can be called an old-school kind of guy, probably speaks for a lot of distillers and consumers alike: “You’d have to do a lot of convincing for me to use those methods. I believe in the science of barrel aging and the provenance of it. I would take a lot of convincing.”